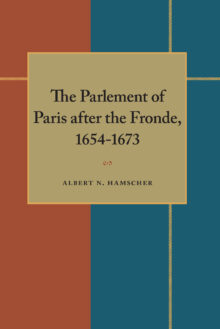 This book assesses how and to what extent the governments of Cardinal Mazarin and Louis XIV controlled the Parlement of Paris in the two decades after the civil wars known as the Fronde. The history of this prestigious court of law bears directly on the broader issue of the growth of “royal absolutism.” Few historians have examined the resurgence of royal authority after the Fronde from the vantage point of traditional institutions, and no other scholarly work deals extensively with the activities of Parlement during this controversial period. This study reveals the methods, achievements, and limitations of absolutism associated with the Sun King. The book investigates the impact of royal policies on the way the judges acquired and transmitted their posts, the sources of their wealth, the social composition of their court, and their judicial and administrative authority. Parlement's political activities and its conflicts with the crown over issues of judicial, financial, and religious importance also receive thorough treatment.The author's extensive archival research indicates that many widely held assumptions about declining importance of Parlement after the civil war are unwarranted. Although Parlement's political activities gradually declined, this transformation was neither as complete nor as irreversible as historians have asserted. Parlement retained some voice in affairs of state, and most of the administrative machinery it could employ to oppose royal policy remained intact. Moreover, the crown failed to attack the sources of parlementaire wealth, and the judges freely enhanced their court's status as a social corporation.