Amy Nelson is associate professor of history at Virginia Tech. She is the author of Music for the Revolution: Musicians and Power in Early Soviet Russia. 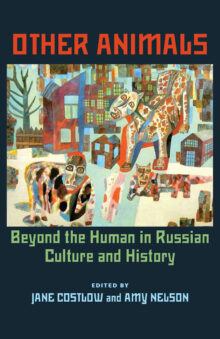 Beyond the Human in Russian Culture and History

The lives of animals in Russia are intrinsically linked to cultural, political and psychological transformations of the Imperial, Soviet, and post-Soviet eras. Other Animals examines the interaction of animals and humans in Russian literature, art, and life from the eighteenth century until the present. The chapters probe a range of human-animal relationships through tales of cruelty, interspecies communion and compassion, and efforts to either overcome or establish the human-animal divide. These essays also explore the unique nature of the Russian experience in this regard.

Four themes run through the volume: the prevalence of animals in utopian visions; the ways in which Russians have both incorporated and sometimes challenged Western sensibilities and practices, such as the humane treatment of animals and the inclusion of animals in urban domestic life; the quest to identify and at times exploit the physiological basis of human and animal behavior and the ideological implications of these practices; and the breakdown of traditional human-animal hierarchies and categories during times of revolutionary upheaval, social transformation, or disintegration.

From failed Soviet attempts to transplant the semi-nomadic Sami and their reindeer herds onto collective farms, to performance artist Oleg Kulik’s scandalous portrayal of Pavlov’s dogs as a parody of the Soviet “new man,” to novelist Tatyana Tolstaya’s post-cataclysmic future world of hybrid animal species and their disaffection from the past, Other Animals presents a completely new perspective on Russian and Soviet history. It also offers a fascinating look into the Russian psyche as seen through human interactions with animals.