Quan Barry is the author of three previous poetry collections: Asylum, winner of the Agnes Lynch Starrett Poetry Prize; Controvertibles; and Water Puppets, winner of the Donald Hall Prize in Poetry. She is also the author of the novel She Weeps Each Time You’re Born. Barry has received two fellowships from the National Endowment for the Arts in both poetry and fiction. She is professor of English at the University of Wisconsin-Madison. 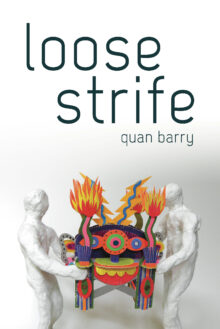 In poems initially inspired by Aeschylus’ fifth-century B.C. trilogy “The Oresteia,” which chronicles the fall of the House of Atreides, Loose Strife investigates the classical sense of loose strife, namely “to loose battle” or “sow chaos,” a concept which is still very much with us more than twenty-five hundred years later. 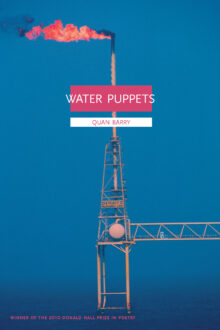 Winner of the 2010 Donald Hall Prize in Poetry

In her third poetry collection, Quan Barry explores the universal image of war as evidenced in Afghanistan and Iraq as well as Vietnam, the country of her birth. In the long poem “meditations” Barry examines her own guilt in initially supporting the invasion of Iraq. Throughout the manuscript she investigates war and its aftermath by negotiating between geographically disparate landscapes&mdash;from the genocide in the Congo&mdash;to a series of pros poem “snapshots” of modern day Vietnam. Despite the gravity of war, Barry also turns her signature lyricism to other topics such as the beauty of Peru or the paintings of Ana Fernandez. 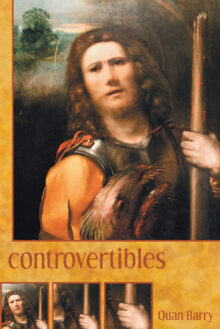 Controvertibles features more of the refined brilliance and delicate lyricism of this poet, cast in a more meditative mode. Throughout, she examines cultural objects by lifting them out of their usual settings and repositioning them in front of new, disparate backdrops. Doug Flutie's famous Hail Mary pass and Rutger Hauer's role in Blade Runner are contextualized within the Tibetan Book of the Dead. Bob Beamon's world-record-setting long jump in the 1968 Olympics is slowed down and examined in the style of The Matrix's revolutionary bullet time.

Samantha Smith, Richard Nixon, the Shroud of Turin, Igor Stravinsky, the largo from Handel's Xerxes, the resurrection of Lazarus, and the groundbreaking 1984 Apple Computer Super Bowl commercial are among the many disparate people and objects Barry uses to explore the multifaceted nature of existence. 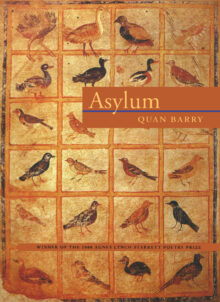 Quan Barry’s stunning debut collection has been compared to Sylvia Plath’s Ariel for the startling complexity of craft and the original sophisticated vision behind it. In these poems beauty is just as likely to be discovered on a radioactive atoll as in the existential questions raised by The Matrix.

Asylum is a work concerned with giving voice to the displaced&mdash;both real and fictional. In “some refrains Sam would have played had he been asked” the piano player from Casablanca is fleshed out in ways the film didn’t allow. Steven Seagal, Yukio Mishima, Tituba of the Salem Witch Trials, and eighteenth-century black poet Phillis Wheatley also populate these poems.

Barry engages with the world&mdash;the Tuskegee syphilis experiments, the legacy of the Vietnam war&mdash;but also tackles the broad meditative question of the individual’s existence in relation to a higher truth, whether examining rituals or questioning, “Where is it written that we should want to be saved?” Ultimately, <I>Asylum</I> finds a haven by not looking away.