Andrew E. Busch is assistant professor of political science at the University of Denver and author of, most recently, Horses in Midstream: U.S. Midterm Elections and Their Consequences. 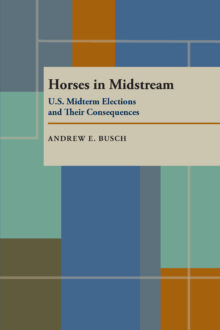 Horses in Midstream breaks the mold of midterm election literature by focusing on the consequences of midterm elections rather than on the causes of the anti-administration pattern of those elections. The book concludes that the midterm pattern has two primary consequences: it stymies the President and provides an opportunity for the revitalization of the opposition party&mdash;and that numerical losses by the President's party is really only a small part of the equation. Consequently, midterm elections can be considered an additional check in the U.S. political system, acting as a mechanism that helps to assure rough two party balance. In examining the historical results from midterm elections dating back to 1894 and extending to the surprising result of 1994 and 1998, Busch has uncovered seven consistent ways in which the president and his party are harmed by midterm elections. These elections unfavorably alter the composition of congress, both between the parties and within the President's own party; they deprive the President of the plebiscitary power derived from his original electoral mandate; they give an intangible sense of momentum to the opposition party, leading to renewed opportunities for the opposition to put forward new leaders and to develop winning issues; they exacerbate splits within the President's own party; and they provide the opposition party with expanded party-building opportunities at the state level. Busch also places the midterm elections into four categories: “preparatory” midterms, which contribute to a subsequent change in party control of the Presidency; “calibrating” midterms in which voters slow but do not reverse extraordinary periods of Presidentially-driven change; “normal” midterms when midterm elections stymie the President without contributing to a White House takeover; and the rare “creative exceptions” when an administration escapes the midterm curse at the polls and find themselves invigorated rather than weakened. Busch's new approach to midterm elections, his well supported conclusions, and his clear, consistent style will certainly be of interest to political scientists and will translate well to the classroom.