Anthony W. Pereira is associate professor of political science at Tulane University. He is the author of The End of Peasantry: The Emergence of the Rural Trade Union Movement in Northeast Brazil, 1961Ð1988, and coeditor of Irregular Armed Forces and Their Role in Politics and State Formation. 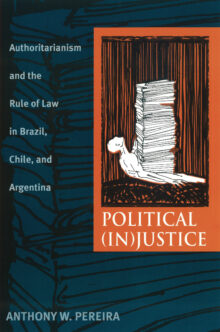 Authoritarianism and the Rule of Law in Brazil, Chile, and Argentina

Why do attempts by authoritarian regimes to legalize their political repression differ so dramatically? Why do some dispense with the law altogether, while others scrupulously modify constitutions, pass new laws, and organize political trials? Political (In)Justice answers these questions by comparing the legal aspects of political repression in three recent military regimes: Brazil (1964&ndash;1985); Chile (1973&ndash;1990); and Argentina (1976&ndash;1983). By focusing on political trials as a reflection of each regime&rsquo;s overall approach to the law, Anthony Pereira argues that the practice of each regime can be explained by examining the long-term relationship between the judiciary and the military. Brazil was marked by a high degree of judicial-military integration and cooperation; Chile&rsquo;s military essentially usurped judicial authority; and in Argentina, the military negated the judiciary altogether. Pereira extends the judicial-military framework to other authoritarian regimes&mdash;Salazar&rsquo;s Portugal, Hitler&rsquo;s Germany, and Franco&rsquo;s Spain&mdash;and a democracy (the United States), to illuminate historical and contemporary aspects of state coercion and the rule of law. 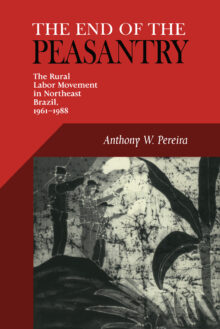 End Of The Peasantry

The rural labor movement played a surprisingly active role in Brazil’s transition to democracy in the 1980s. While in most Latin American countries rural labor was conspicuously marginal, in Brazil, an expanded, secularized, and centralized movement organized strikes, staged demonstrations for land reform, demanded political liberalization, and criticized the government’s environmental policies.
In this ground-breaking book, Anthony W. Pereira explains this transition as the result of two intertwined processes – the modernization of agricultural production and the expansion of the welfare state into the countryside – and explores the political consequences of these processes, occurring not only in Latin America but in much of the Third World.