Archibald R. M. Ritter is a professor of economics and international affairs at Carleton University in Ottawa, Canada. His works on Cuba include The Economic Development of Revolutionary Cuba: Strategy and Performance. 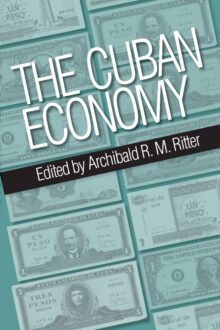 Cuba faced an economic meltdown of catastrophic proportions in the early 1990s when covert subsidies from the former Soviet Union disappeared. Policies instituted by the island republic's government to handle the worst problems have had inconsistent results. Opening the economy to foreign enterprise has resulted in positive growth in tourism and nickel and cigar exports. However, remnants of the older economy, including the sugar and biotechnological industries, have only experienced a decrease in capital and importance. Basic educational and health services have been maintained surprisingly well, but the standard of living is still far below the highs of the 1980s. With contributions from many leading Cuba scholars, The Cuban Economy offers not only an analysis of the economy since 1990, but also a look towards future prospects.