Ashraf H. A. Rushdy is professor and chair of African American Studies and professor of English at Wesleyan University. 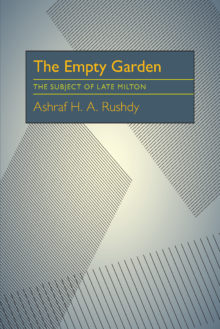 The Subject of Late Milton

The Empty Garden draws a portrait of Milton as a cultural and religious critic who, in his latest and greatest poems, wrote narratives that illustrate the proper relationships among the individual, the community, and God. Rushdy argues that the political theory implicit in these relationships arises from MiltonÆs own drive for self-knowledge, a kind of knowledge that gives the individual freedom to act in accordance with his or her own understanding of GodÆs will rather than the stateÆs. Rushdy redefines MiltonÆs creative spirit in a way that encompasses his poetic, political, and religious careers.