Historian Baruch Gurevitz is the author of numerous books, including After Gorbachev: History in the making : its effects on the Jews in the former Soviet Union, 1989-1994, and Open Gates: The story Behind the Mass Immigration to Israel from the Soviet Union and its successor States. 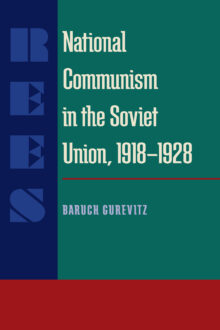 National Communism in the Soviet Union, 1918-28

The Jewish Communist Workers' Party, the Poale Zion, provides a unique perspective on the question of how Marxism and the early Soviet Union dealt with issues of nationalism. According to Bolshevik ideology, when anti-Semitism disappeared in the new Socialist society, Jews would assimilate. In reality, such assimilation would be a very long, slow process. The Poale Zion supported the socialist struggle against oppression and exploitation of classes and nations, but it called for the formation of an international organization that would recognize the right of Jews to emigrate freely to Palestine and work for the creation of a democratic republic where people could retain their national identities and have both autonomy and representation in the union. Gurevitz analyzes the Soviet Poale Zion as representative of Jewish communism as nationalism in its purest form, and he traces the complex contradictions between Jewish nationalism and the Communist ideal of assimilation in the early years of the Soviet Union.