Larry Levis was born in Fresno, California, in 1946. His first book of poems, Wrecking Crew, won the United States Award from the International Poetry Forum, and was published in the Pitt Poetry Series in 1972. His second book, The Afterlife, won the Lamont Award from the American Academy of Poets in 1976. In 1981, The Dollmaker’s Ghost was a winner of the Open Competition of the National Poetry Series. Among his other awards were three fellowships in poetry from the National Endowment for the Arts, a Fulbright Fellowship, and a Guggenheim Fellowship. Larry Levis died in 1996. 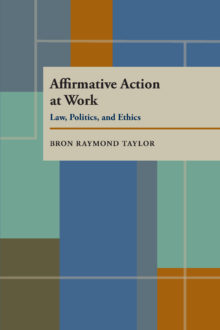 Bron Taylor unites theoretical and applied social science to analyze a salient contemporary moral and political problem. Three decades after the passage of civil rights laws, criteria for hiring and promotion to redress past discrimination and the sensitive “quota” question are still unresolved issues.Taylor reviews the works of prominent social scientists and philosophers on the moral and legal principles underlying affirmative action, and examines them in light of his own empirical study. Using participant observation, in-depth interviewing, and a detailed questionnaire, he examines the attitudes of four groups in the California Department of Parks and Recreation: male and female, white and nonwhite workers. Because the department has implemented a strong program for ten years, its employees have had firsthand experience with affirmative action. Their views about the rights of minorities in the economy are often surprising.This work presents a comprehensive picture of the cross-pressures-the racial fears and antagonisms, the moral, ethical, and religious views about fairness and opportunity, the rigid ideas-that guide popular attitudes.