Carl P. Parrini is emeritus professor of history at the University of Northern Illinois. 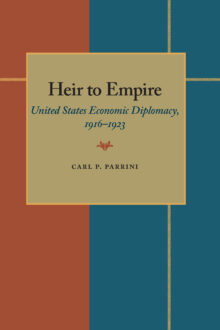 In this book, Carl P. Parrini examines the evolution of United States economic diplomacy during a critical period in world history. After World War I, leaders were poised to begin “The American Century”, when the United States would assume the dominant role as the world's foremost political, economic and military power. This was to be achieved by establishing harmonic relations with other nations-allowing leverage on minor economic goals, while maintaining U.S. interests on major objectives. This theory of foreign policy is often attributed to president Warren Harding or his Secretary of Commerce, Herbert Hoover. Yet, Parrini's study determines, nearly all decisions made with respect to international investment, allocation of raw materials, reparations, war debts, and tariffs, were based on earlier principles established by Woodrow Wilson's administration.