Carmen Diana Deere, past president of the Latin American Studies Association, is professor of economics and director of the Center for Latin American, Caribbean and Latino Studies at the University of MassachusettsÐAmherst. 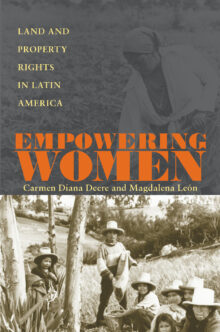 The expansion of married women’s property rights was a main achievement of the first wave of feminism in Latin America. As Carmen Diana Deeere and Magdalena Leon reveal, however, the disjuncture between rights and actual ownership remains vast. This is particularly true in rural areas, where the distribution of land between men and women is highly unequal. In their pioneering, twelve-country comparative study, the authors argue that property ownership is directly related to womenÆs bargaining power within the household and community, point out changes resulting from recent gender-progressive legislation, and identify additional areas for future reform, including inheritance rights of wives.