Charlee Brodsky, a professor of photography at Carnegie Mellon University, is the coauthor of Pittsburgh Revealed: Photographs Since 1850, A Town Without Steel: Envisioning Homestead, and, with Jennifer Matesa, Navel-Gazing: The Days and Nights of a Mother in the Making. Brodsky and Matesa have both won numerous awards for their work, and both live in Pittsburgh.

Stephanie Byram was an active, athletic young woman entering the prime of her life. She held dreams of earning her doctorate, pursing a career, falling in love, and starting a family. A doctor’s visit, shortly after her thirtieth birthday, changed everything. Knowing Stephanie tells her incredible story.

Stephanie Byram was an active, athletic young woman entering the prime of her life. She held dreams of earning her doctorate, pursing a career, falling in love, and starting a family. A doctor’s visit, shortly after her thirtieth birthday, changed everything.

She had been concerned about a painful, swollen right breast, and tests confirmed the presence of a tumor. Stephanie was diagnosed with highly aggressive, highly malignant breast cancer-Stage IIIb infiltrative ductal carcinoma-and within two months she underwent a double mastectomy. Doctors gave her a 50 percent chance of surviving five years.

Despite this prognosis, Stephanie looked to the future, and refused to be deterred by the obstacles thrown suddenly into her path. Though she was rarely cancer-free and suffered recurrences that were progressively more invasive and damaging to her body, over the course of the next eight years she would live a life of her choosing.

Stephanie fell in love, married, and bought a home. She earned her Ph.D., and even found the time and energy to revise her dissertation topic to how women make medical decisions after they have been diagnosed with life-threatening illnesses. She traveled to London, Tibet, and Hawaii; went on safari in Zambia and Botswana, rang in the millennium atop the Great Barrier Reef; hiked the grueling, thirty-five-mile Inca trail to Machu Picchu on her honeymoon, just weeks after a devastating recurrence; and visited the Grand Canyon before her death in June 2001.

Stephanie came to appreciate the details and experiences found in a typical day. Learning to live in the moment, she found joy while playing with her cats, tending her garden, observing the birds jostling at the feeder, walking in the park by moonlight, laughing with friends. And running.

Always an avid runner, Stephanie placed even greater importance on the sport following her diagnosis. She vowed to be the first person to run in each Susan G. Komen Race for the Cure, and would eventually run in thirty out of sixty-one events. To help publicize this uncommon feat, she approached Charlee Brodsky about taking some photographs for inclusion in a press packet. What eventually evolved was much more.

As their working relationship grew, so did their bond. Stephanie was Brodsky’s subject, but they became collaborators and closer friends. They developed art exhibitions, a video, and often gave lectures, presentations, and inspirational talks to groups across the country. And, now, together they have created this book. Knowing Stephanie combines Brodsky’s photographs and Stephanie’s dialogue, which along with Jennifer Matesa’s biographical essay, “Reconstructing a Life,” paints a complete and compelling portrait of an extraordinary woman.

For Stephanie, this project was an opportunity to visualize herself-her life and her body-differently. According to Brodsky, “She was able to transform her profound disappointment with the cards she was dealt into a life that was about living.” In so doing, Stephanie has provided a treasure for us all. 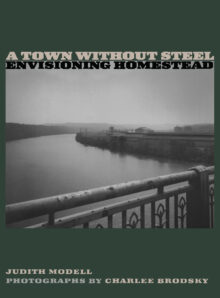 A Town Without Steel

In 1986, with little warning, the USX Homestead Works closed. Thousands of workers who depended on steel to survive were left without work. A Town Without Steel looks at the people of Homestead as they reinvent their views of household and work and place in this world. The book details the modifications and revisions of domestic strategies in a public crisis. In some ways unique, and in some ways typical of American industrial towns, the plight of Homestead sheds light on social, cultural, and political developments of the late twentieth century.

In this anthropological and photographic account of a town facing the crisis of deindustrialization, A Town Without Steel focuses on families. Reminiscent of Margaret Byington and Lewis Hine’s approach in Homestead, Charlee Brodsky’s photographs document the visual dimension of change in Homestead. The mill that dominated the landscape transformed to a vast, empty lot; a crowded commercial street turns into a ghost town; and an abundance of well-kept homes become an abandoned street of houses for sale. The individual narratives and family snapshots, Modell’s interpretations, and Brodsky’s photographs all evoke the tragedy and the resilience of a town whose primary source of self-identification no longer exists.