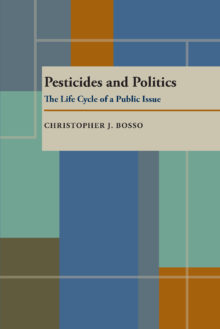 The Life Cycle of a Public Issue

Winner of the 1988 Policy Studies Organization Book Award Among the more dramatic changes brought by World War II was the widespread introduction of new synthetic chemical pesticides – products welcomed as technological answers to a whole host of agricultural problems. The dangers posed by these products were often ignored in the rush to get them onto the market. Federal policy primarily reflected the interests of those promoting the new technologies. The risks associated with pesticides, as yet ill-understood, continued to be played down during the 1950s, despite their sudden emergence as a public problem as a result of health scares and fish and wildlife deaths following massive pest eradication campaigns. These events, together with the publication of Rachel CarsonÆs Silent Spring, spawned the environmental movement of the 1960s.Dramatic changes came in the early 1970s as environmental values permeated the institutions and dynamics of American politics. Such changes produced new priorities, and – in part – a redirection in federal policy on chemical pesticides. The National Environmental Policy Act, the creation of the Environmental Protection Agency, congressional reforms, and broad popular support opened opportunities for those seeking to alter pesticides policy. But by the mid-1980s, after more than a decade of conflict, that policy is in limbo, caught between powerful environmental, economic, and political forces.How did this happen?Pesticides and Politics traces the long battle over control of pesticides through an analytical framework that is at the same time historical, comparative, and theoretical. Christopher J. BossoÆs account analyzes the responses to this complex problem by commercial interests, government, the media, and the public, and shows how the issue evolved over forty years of technological and political change.BossoÆs research leads to a number of insights about the U.S. structure of governance. It shows how the system itself determines who gains access to decision making and who is excluded, and how conflicts are redefined as the range of interests attached to them grows. Bosso concludes that for fundamental institutional reasons, as well as political ones, federal pesticides policy lies stalled and impotent in the mid-1980s.Relying heavily on government documents, the sizable literature on environmental politics, and interviews with relevant policy actors, Pesticides and Politics will enlighten students of the public policy process, and also be useful in courses in policy making and policy analysis.