Christopher W. Lane is the author of Impressions of Niagara, which documents the Charles Rand Penney Collection of over seven hundred printed images of Niagara Falls, and was curator of an exhibit of the collection at the Castellani Art Museum. Lane has also written What Is A Print? and A Guide to Collecting Historical Prints, which are guides to map and print collecting. He regularly appears as the map and print expert on The Antiques Roadshow on PBS. 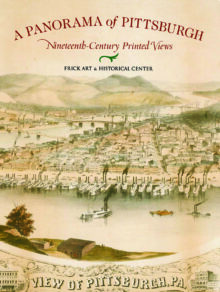 A Panorama of Pittsburgh

A marvel of modern technology and leader in iron and steel making, coke production, and glass manufacturing, nineteenth-century Pittsburgh acquired a near-mythical status. The city became a symbol of American industrial might and was depicted in everything from fine art to advertising materials. A Panorama of Pittsburgh is a testament to the extensive visual representation of Pittsburgh in books, magazines, illustrated newspapers, frameable views, maps, corporate identity, lithographs, and other types of materials during this period. Produced to accompany an exhibition hosted by the Frick Art & Historical Center as part of Pittsburgh 250, a regional celebration of the founding of Pittsburgh in 1758, the book features works selected from private, public, corporate, and club collections in Pittsburgh, as well as other institutions around the country. Guest curator Christopher W. Lane enlightens readers on the printmaking industry in the city and provides the most comprehensive list of prints of nineteenth-century Pittsburgh ever assembled.