Cynthia Paces is associate professor of history at The College of New Jersey. Her articles have appeared in the journals Radical History Review and Nationalities Papers, and she has contributed chapters to several books, including: Memory and Impact of Political Transformation in Public Space; Staging the Past; and Constructing Identity in East Central Europe. 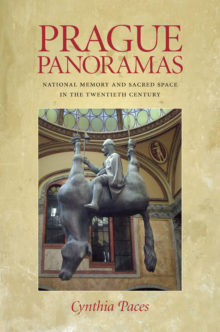 National Memory and Sacred Space in the Twentieth Century

Prague Panoramas examines the creation of Czech nationalism through monuments, buildings, festivals, and protests in the public spaces of the city during the twentieth century. These “sites of memory” were attempts by civic, religious, cultural, and political forces to create a cohesive sense of self for a country and a people torn by war, foreign occupation, and internal strife.

The Czechs struggled to define their national identity throughout the modern era. Prague, the capital of a diverse area comprising Czechs, Slovaks, Germans, Poles, Ruthenians, and Romany as well as various religious groups including Catholics, Protestants, and Jews, became central to the Czech domination of the region and its identity. These struggles have often played out in violent acts, such as the destruction of religious monuments, or the forced segregation and near extermination of Jews.

During the twentieth century, Prague grew increasingly secular, yet leaders continued to look to religious figures such as Jan Hus and Saint Wenceslas as symbols of Czech heritage. Hus, in particular, became a paladin in the struggle for Czech independence from the Habsburg Empire and Austrian Catholicism.

Through her extensive archival research and personal fieldwork, Cynthia Paces offers a panoramic view of Prague as the cradle of Czech national identity, seen through a vast array of memory sites and objects. From the Gothic Saint Vitus Cathedral, to the Communist Party's reconstruction of Jan Hus's Bethlehem Chapel, to the 1969 self-immolation of student Jan Palach in protest of Soviet occupation, to the Hosková plaque commemorating the deportation of Jews from Josefov during the Holocaust, Paces reveals the iconography intrinsic to forming a collective memory and the meaning of being a Czech. As her study discerns, that meaning has yet to be clearly defined, and the search for identity continues today.