Daniel J. Palazzolo is professor of political science at the University of Richmond. 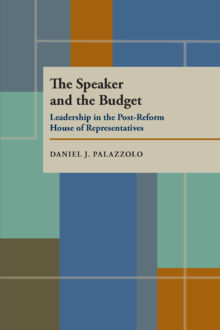 The Speaker and the Budget

Leadership in the Post-Reform House of Representatives

One of the most important changes in Congress in decades were the extensive congressional reforms of the 1970s, which moved the congressional budget process into the focus of congressional policy making and shifted decision making away from committees. This overwhelming attention to the federal budget allowed party leaders to emerge as central decision makers. Palazzolo traces the changing nature of the Speaker of the House's role in the congressional budget process from the passage of the Budget and Impoundment Control Act of 1974, through the 100th Congress in 1988. As the deficit grew and budget politics became more partisan in the 1980s, the Speaker became more involved in policy-related functions, such as setting budget priorities and negotiating budget agreements with Senate leaders and the president. Consequently, the Speaker's role as leader of the institution was subordinated to his role as a party leader.