Daniel Marder was chairman of the Department of English at Slippery Rock University. He is the author or editor of several books including Hugh Henry Brackenridge, and Incidents of the Insurrection. 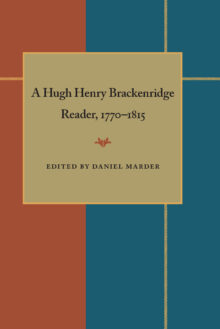 A collection of the work of Hugh Henry Brackenridge (1748-1816)-one of the most vigorous and prolific writers of his time. An ardent believer in an educated public, his efforts to implant the ideals of democracy in early America made him a legend on the frontier. This selection of his work captures the essence of the man and his time, and includes writing published in the United States Magazine, Pittsburgh Gazette, as well as his narrative on the Whiskey Rebellion, Incidents of the Insurrection.