David J. Herring, professor of law and dean of the University of Pittsburgh School of Law, has written extensively on child welfare law issues. 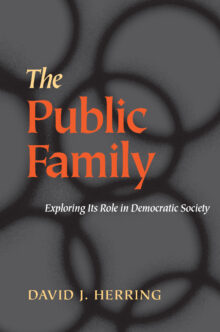 Exploring Its Role In Democratic Societies

Those concerned with investigating the political functions of the family far too often identify only one: the production of “good democratic citizens.” As a result, public discussion of family law and policy has been confined to a narrow continuum that ignores the family's other, often subversive, political functions.In The Public Family David Herring's goal is to create a new rhetoric that moves beyond the stalemate that often results from the war between advocates of parental rights and those of children's rights. This “rhetoric of associational respect” allows him to constructively address the role of rights and the limits of individualism in political and legal theory. While acknowledging the family's importance in facilitating state functioning and power in a large, pluralistic democracy (the aforementioned production of good citizens), Herring fully explores the ways in which the family produces diversity and promotes tolerance. Unlike other works on the subject, which view the differences between individuals as constituting the central challenge for American society, Herring focuses on the importance of such differences. In doing so, he enriches and enlivens the often divisive public discussion of family law and policy.