David Pion-Berlin is professor of political science at the University of California, Riverside. 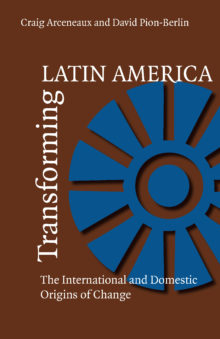 The International And Domestic Origins Of Change

This ambitious book offers a clear and unified framework for understanding political change across Latin America. The impact of U.S. hegemony and the global economic system on the region is widely known, and scholars and advocates alike point to Latin America’s vulnerability in the face of external forces. In spite of such foreign pressure, however, individual countries continue to chart their own courses, displaying considerable variation in political and economic life.
Looking broadly across the Western Hemisphere, with examples from Brazil, the Southern Cone, the Andes, and Central America, Arceneaux and Pion-Berlin identify general rules that explain how international and domestic politics interact in specific contexts. The detailed, accessible case studies cast new light on such central problems as neoliberal economic reform, democratization, human rights, regional security, environmental degradation, drug trafficking, and immigration. And they consider not only what actors, institutions, and ideas matter in particular political contexts, but when, where, and how they matter. By dividing issues into the domains of “high” and “low” politics, and differentiating between short-term problems and more permanent concerns, they create an innovative typology for analyzing a wide variety of political events and trends.