Eric McGlinchey is assistant professor of government and politics at George Mason University. 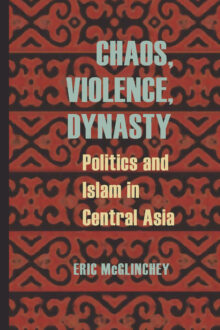 Politics and Islam in Central Asia

In the post-Soviet era, democracy has made little progress in Central Asia. In Chaos, Violence, Dynasty, Eric McGlinchey presents a compelling comparative study of the divergent political courses taken by Kyrgyzstan, Uzbekistan, and Kazakhstan in the wake of Soviet rule. McGlinchey examines economics, religion, political legacies, foreign investment, and the ethnicity of these countries to evaluate the relative success of political structures in each nation.

McGlinchey explains the impact of Soviet policy on the region, from Lenin to Gorbachev. Ruling from a distance, a minimally invasive system of patronage proved the most successful over time, but planted the seeds for current “neo-patrimonial” governments. The level of direct Soviet involvement during perestroika was the major determinant in the stability of ensuing governments. Soviet manipulations of the politics of Uzbekistan and Kazakhstan in the late 1980s solidified the role of elites, while in Kyrgyzstan the Soviets looked away as leadership crumbled during the ethnic riots of 1990. Today, Kyrgyzstan is the poorest and most politically unstable country in the region, thanks to a small, corrupt, and fractured political elite. In Uzbekistan, Islam Karimov maintains power through the brutal suppression of disaffected Muslims, who are nevertheless rising in numbers and influence. In Kazakhstan, a political machine fueled by oil wealth and patronage underlies the greatest economic equity in the region, and far less political violence.

McGlincheyÆs timely study calls for a more realistic and flexible view of the successful aspects of authoritarian systems in the region that will be needed if there is to be any potential benefit from foreign engagement with the nations of Central Asia, and similar political systems globally.