Eugene Green is director of the writing program at Stonehill College. 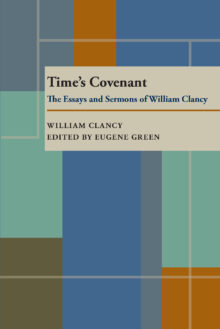 The Essays and Sermons of William Clancy

Time's Covenant offers a collection of the sermons and essays of William Clancy, one of the most vehement opponents of McCarthyism, who was also an ardent civil libertarian and literate commentator on the changing times of the 1950s and 1960s. The articles originally appeared in Commonweal, dubbed the journal of “liberal Catholics,” as well as the New York Times, Saturday Review and Worldview. Clancy reflects on authors Ignazio Silone, Arnold Toynbee, Walter Lippman, as well as American poets, the Dreyfus Affair, and liberal Catholicism.