Festus P. Summers was professor and chair of the history department at West Virginia University, and the author or editor of several books, including Baltimore and Ohio in the Civil War and The Cabinet Diary of William L. Wilson, 1896-1897. 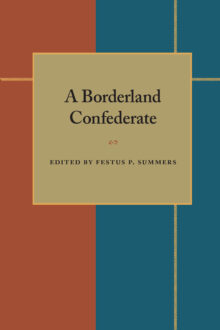 This book compiles the letters and Civil War diary of William Lyne Wilson, a confederate soldier who went on to become a state legislator, president of West Virginia University, and Postmaster General of the United States. Like many others from his region that would later became West Virginia, Wilson was torn between an allegiance to the confederacy, and the Unionist new-state movements. His writings are essentially a history of the War, from the John Brown incident through several major campaigns up to Appomattox. A private in the Twelfth Virginia Cavalry, Wilson participated in the Jackson campaign in the Shenandoah Valley in 1862, William E. (“Grumble”) Jones’s campaign across the Alleghenies in 1863, and Jubal A. Early’s Shenandoah Valley campaign of 1864, among others. On the day of Appomattox, his brigade reached Lynchburg and on April 10, 1865 he entered the last line in his diary.