Frauke Schnell is a professor of political science at West Chester State University. 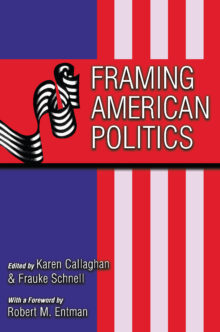 Most issues in American political life are complex and multifaceted, subject to multiple interpretations and points of view. How issues are framed matters enormously for the way they are understood and debated. For example, is affirmative action a just means toward a diverse society, or is it reverse discrimination? Is the war on terror a defense of freedom and liberty, or is it an attack on privacy and other cherished constitutional rights? Bringing together some of the leading researchers in American politics, Framing American Politics explores the roles that interest groups, political elites, and the media play in framing political issues for the mass public.
The contributors address some of the most hotly debated foreign and domestic policies in contemporary American life, focusing on both the origins and process of framing and its effects on citizens. In so doing, these scholars clearly demonstrate how frames can both enhance and hinder political participation and understanding.