Frederick B. Chary is professor emeritus of history at Indiana University. 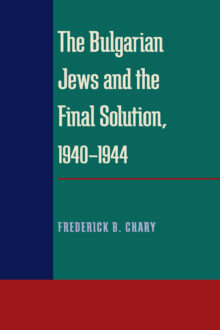 By Frederick B. Chary

Virtually all of Bulgaria's Jewish citizens escaped the horrors of the Polish death camps and survived either to migrate to Israel or to remain in their homeland. Frederick Chary relates the history of the Bulgarian government's policy toward the Jews and how the determination and moral courage of a small country could successfully thwart the Final Solution.

Dr. Chary uses the German diplomatic papers captured at the end of the war, published and unpublished Bulgarian sources, archives in Bulgaria and Israel, as well as personal interviews with survivors and former diplomats and officials to reveal intensely dramatic and moving stories-the still mysterious death of King Boris, the intrigues by which Bulgaria stalled deportation, the expulsion of Jews from the new territories, and examples of guilt, appeasement, and courage.