George A. Krause is Alumni Foundation Distinguished Professor of Public Administration at the University of Georgia. 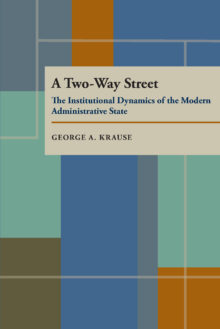 The Institutional Dynamics of the Modern Administrative State

By George A. Krause

One of the central questions of political science has been whether politicians control the bureaucracy, or whether the bureaucracy possesses independent authority from democratic institutions of government. Relying on advanced statistical techniques and case studies, George Krause argues instead for a dynamic system of influence&mdash;one allowing for two-way interaction among the president, congress, and bureaucratic agencies. Krause argues that politicians and those responsible for implementing policy respond not only to each other, but also to events and conditions within each government institution as well as to the larger policy environment. His analysis and conclusions will challenge conventional theoretical and empirical wisdom in the field of administrative politics and public bureaucracy.