Gerald J. Massey is Distinguished Service Professor of Philosophy at the University of Pittsburgh. From 1988 to 1997 he was director of the University of Pittsburgh’s renowned Center for Philosophy of Science. For the past several years he has been investigating the philosophical implications of the sciences of animals in an effort to create a new field that he calls philosophical ethology. In 1997, German President Roman Herzog conferred on him the Officer’s Cross of the Order of Merit of the Federal Republic of Germany (Bundesverdienstkreuz 1. Klasse) for his contributions to German-American Philosophy. 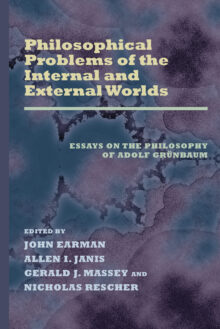 Philosophical Problems of the Internal and External Worlds

Essays on the Philosophy of Adolf Grünbaum

The inaugural volume of the Pittsburgh-Konstanz series, devoted to the work of philosopher Adolf Grunbaum, encompasses the philosophical problems of space, time, and cosmology, the nature of scientific methodology, and the foundations of psychoanalysis.