Gerald H. Clarfield was emeritus professor of history at the University of Missouri, and the author of Timothy Pickering and American Diplomacy. 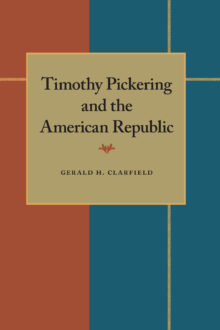 Timothy Pickering and the American Republic

Timothy Pickering was an important figure in the early American republic. For more than fifty years, he was deeply entrenched in the political, military and diplomatic affairs of the young nation. He held important administrative posts during the Revolution, two cabinet posts, and served as a congressman, senator, and as a spokesman for the extremist element of New England's Federalists. Clarfield presents the first comprehensive biography of Pickering, and a critical assessment of this controversial and often intractable man.