Goetz Frank Ottmann is a research fellow at the Centre of Latin American Studies at LaTrobe University in Melbourne. 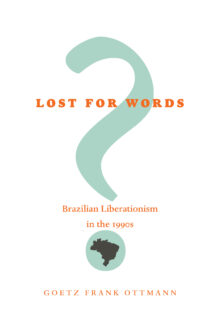 Brazilian Liberationism in the 1990s

Lost for Words? explores the rise and decline of progressive Catholic grassroots activism and its drive for social justice and democratic change in four low-income neighborhoods in São Paulo, Brazil. Ottmann focuses on the obstacles faced by the poor who took seriously the claim that “the people” were to transform Brazilian society “from the bottom up.” He follows their travails through periods of democratization, mass unemployment, and conservative backlash within the Church.

Goetz Frank Ottmann moves beyond purely political analysis to record how residents and progressive Catholic activists were drawn into a struggle for a “juster” society, and how this movement began to unravel even before it reached its peak in the early 1980s.

Based on in-depth interviews and participant observation, and drawing on theoretical insights from recent debates on social movements and the sociology of religion, he examines how, by the early 1990s, the liberationist movement had lost its following, lost its allies, failed to achieve its core goals, and seemed to die. Ottmann then shows how in recent years activists have worked to create a new and pragmatic form of religious activism, one that draws on a range of agendas, including Catholic feminism.