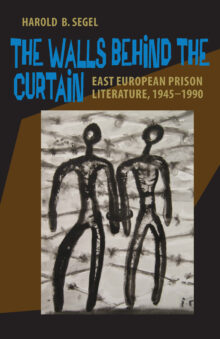 The Walls Behind the Curtain

By Harold B. Segel

Because of their visibility in society and ability to shape public opinion, prominent literary figures were among the first targets of Communist repression, torture, and incarceration. Authors such as Alexsandr Solzhenitsyn famously documented the experience of internment in Soviet gulags. Little, however, has been published in the English language on the work of writers imprisoned by other countries of the Soviet bloc.

For the first time, The Walls Behind the Curtain presents a collection of works from East European novelists, poets, playwrights, and essayists who wrote during or after their captivity under communism. Harold B. Segel paints a backdrop of the political culture and prison and labor camp systems of each country, detailing the onerous conditions that writers faced. Segel then offers biographical information on each writer and presents excerpts of their writing. Notable literary figures included are Václav Havel, Eva Kanturková, Milan &Scaron;imecka, Adam Michnik, Milovan Djilas, Paul Goma, Tibor Déry, and Visar Zhiti, as well as many other writers.

This anthology recovers many of the most important yet overlooked literary voices from the era of Communist occupation. Although translated from numerous languages, and across varied cultures, there is a distinct commonality in the experiences documented by these works. The Walls Behind the Curtain serves as a testament to the perseverance of the human spirit and a quest for individual liberty that many writers forfeited their lives for.