Heinrich Brunner is an international consultant and lives in Germany. He conducted research for this book in Cuba and Berlin and in the United States at the University of Pittsburgh and UCLA. 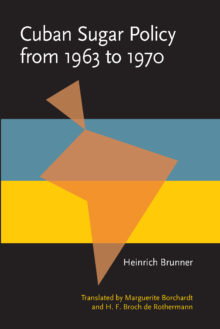 In 1963 Cuba launched a program to develop its economy by expanding its sugar production and export trade. Cuban economists believed that through intensive development of this leading sector, they could generate capital to invest in manufacturing and thus move away from a one-crop economy.

After providing background information on Cuba's prerevolutionary economy, Brunner explores the effects of Communist ideology and the U.S. embargo on the country's resources and trade, and analyzes the problems Cuba faced in shifting from trade with the U.S. to trade with the Soviet Union and Soviet bloc. He evaluates their implementation of the development plan, assessing the sugar industry within Cuba as well as how its accelerated development affected the rest of the domestic economy.