Ilse Abshagen Leitinger was internship coordinator and research supervisor at the Institute for Central American Development Studies and a founding member of the Latin American Institute of Feminist Research, both in San Jose, Costa Rica. She now lives in Littleton, Colorado. 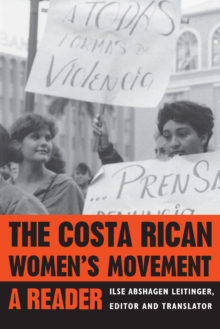 This reader reflects the genesis, scope, and direction of women’s activism in a single Latin American country. It collects the voices of forty-one diverse women who live in Costa Rica, some radical, others strongly conservative, and most ranging inbetween, as they write about their lives, their problems, their aspirations.
Unlike the comparative studies of women’s issues that look at several different countries, the reader provides an insider’s view of one small, but quintessentially Latin American, society. These women write of their own experience in organizing and working for change within the Costa Rican community. Some represent groups fitting into traditional “women’s movement” that wants to improve certain aspects of women’s and families’ daily lives. Still others, the “feminists,” argue forcefully that true improvement requires a profound change of power relations in society, of women’s access to power and decision making.
The articles are organized into thematic groups that range from the definitions of Feminism in Costa Rica to women in Costa Rican history, women’s legal equality, discrimination against women, and the status of Women’s Studies. The brief biographies that identify each author underscore the leadership of Costa Rican women in Latin American Feminism. The founders and editors of Mujer, one of the most influential Feminist journals in Latin America, are among the authors represented in the reader.
The audience for this book will include specialists interested in Latin America, in women in Latin America, and in the international women’s movement.