J. Blake Scott is associate professor of writing and rhetoric at the University of Central Florida. He is the author of Risky Rhetoric: AIDS and the Cultural Practices of HIV Testing, coeditor of Critical Power Tools: Technical Communication and Cultural Studies, and winner of the 2007 NCTE Award for Best Collection of Essays on Technical and Scientific Communication. 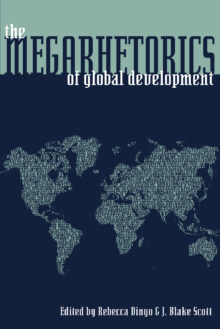 The Megarhetorics of Global Development

After World War II, an unprecedented age of global development began. The formation of the World Bank and the International Monetary Fund allowed war torn and poverty stricken nations to become willing debtors in their desire to entice Western investment and trade. New capital, it was foretold, would pave the way to political and economic stability, and the benefits would “trickle down” to even the poorest citizens. The hyperbole of this neocolonialism, however, has left many of these countries with nothing but compounded debt and unfulfilled promises.

The Megarhetorics of Global Development examines rhetorical strategies used by multinational corporations, NGOs, governments, banks, and others to further their own economic, political, or technological agendas. These wide-ranging case studies employ rhetorical theory, globalization scholarship, and analysis of cultural and historical dynamics to offer in-depth critiques of development practices and their material effects. By deconstructing megarhetorics, at both the local and global level, and following their paths of mobilization and diffusion, the concepts of “progress” and “growth” can be reevaluated, with the end goal of encouraging self-sustaining and ethical outcomes.