James C. Mohr is College of Arts and Sciences Distinguished Professor of History and Philip H. Knight Professor of Social Science at the University of Oregon. He is the author of numerous books, including Abortion in America: The Origins and Evolution of National Policy,1800-1900; and Radical Republicans in the North: State Politics During Reconstruction. 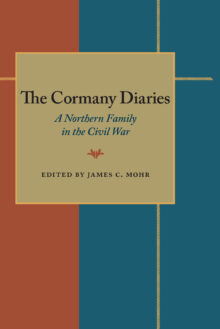 A Northern Family in the Civil War

This unique pair of diaries offers an unforgettable account of the life of an average Northern family coping with the dangers and tensions of the Civil War. There were thousands like them, but few left such a clear and indelible record of their experiences.

Rachel Cormany (nee Bowman) met Samuel Cormany at Otterbein University in Ohio. After her husband enlisted in a cavalry unit, she writes poignantly of her anxieties, poverty, and loneliness. Samuel, on the other hand, is ambitious in his military career, and tells enthusiastically about his engagements that include camp life, cavalry raids, army politics, and his battles with alcohol. Editor James C. Mohr has arranged the diaries so that the voices of husband and wife alternate, and his notes enlighten many of the issues relating to the diarists and their daily lives.