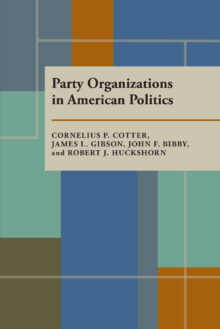 Contradicting the conventional political wisdom of the 1970s, which said state political parties were dormant and verging upon extinction, this book reveals that state party organizations actually grew stronger in the 1960s and 1970s.Reprinted with a new preface that covers changes in the 1980s in electoral politics, Party Organizations in American Politics encourages a reappraisal of scholarly treatment of party organization in political science.