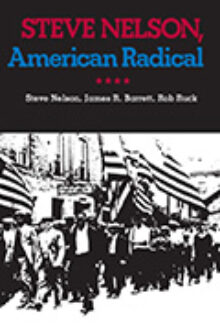 As the immigrant teenage son of a Croatian miller, Steve Nelson arrived in the United States after World War I and entered a world of chronic unemployment, low wages, dangerous work, and discrimination. Following the path taken by many fellow immigrant workers, he joined the Communist Party. He became a full-time organizer and ultimately a major leader, only to resign in 1957 after unsuccessful attempts to democratize the American party.

This remarkable oral biography, recounted in collaboration with two historians, describes day-to-day life in the party and traces Nelson's career from his beginnings in the Pennsylvania coalfields to his secret work as party courier in the Far East; form the battlefields of Civil War Spain to the jails of Cold War Pittsburgh; and from a small group of Communist autoworkers in Detroit to the upper reaches of a party leadership in New York. It is the frank and analytical account of a leading American working-class activist.