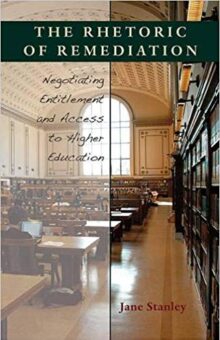 The Rhetoric of Remediation

American universities have long professed dismay at the writing proficiency levels of entrants, and the volume of this complaint has been directly correlated to social, political, or economic currents. Many universities, in their rhetoric, have defined high need for remediation as a crisis point in order to garner state funding or to manage admissions.

In The Rhetoric of Remediation, Jane Stanley examines the statements and actions made regarding remediation at the University of California, Berkeley (Cal). Since its inception in 1868, university rhetoric has served to negotiate the tensions between an ethic of access and the assertion of elite status. Great care has been taken to promote the politics of public accessibility, yet in its competition for standing among other institutions, Cal has been publicly critical of the “underpreparedness” of many entrants. Early on, Cal developed programs to teach “Subject A” (Composition) to the vast number of students who lacked basic writing skills.

Stanley documents the evolution of the university’s “rhetoric of remediation” at key moments in its history, such as: the early years of “open gate” admissions; the economic panic of the late 1800s and its effect on enrollment; Depression-era battles over funding and the creation of a rival system of regional state colleges; the GI Bill and ensuing post-WWII glut in enrollments; the “Red Scare” and its attacks on faculty, administrators, and students; the Civil Rights Movement and the resultant changes to campus politics; sexist admission policies and a de facto male-quota system; accusations of racism in the instruction of Asian Americans during the 1970s; the effects of an increasing number of students, beginning in the 1980s, for whom English was a second language; and the recent development of the College Writing Program which combined freshmen composition with Subject A instruction, in an effort to remove the concept of remediation altogether.

Setting her discussion within the framework of American higher education, Stanley finds that the rhetorical phenomenon of “embrace-and-disgrace” is not unique to Cal, and her study encourages compositionists to evaluate their own institutional practices and rhetoric of remediation for the benefit of both students and educators.