Janice Auth serves as administrator to Pennsylvania Peace Links, which encourage peaceful alternatives to war by promoting international understanding and cooperation. She volunteers for the Pittsburgh Council for International Visitors and is an advisor to the International Poetry Forum. 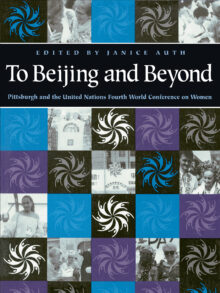 To Beijing and Beyond

Pittsburgh and the United Nations Fourth World Conference on Women

Documents 1995 UN Fourth World Conference on Women in Beijing. Forty three essays by men and women who attended the conference tell of their experiences and how they’ve applied what they learned at home.

The words of these college presidents, students, teachers, homemakers, retirees, writers, clergy, and entrepreneurs who participated in the UN Fourth World Conference on Women document the remarkable initiative, energy, and vision of those who began and continue to coordinate the activities of Pittsburgh/Beijing ’95 and Beyond. Auth also offers background information on the three previous UN Women’s Conferences, outlines the work that has been accomplished since the 1995 conference, and the plans for implementing the Beijing Platform for Action at the local level. Her remarks and the stories she has collected offer an intimate portrayal of an historical event that was largely under-reported by popular media. Essential reading for anyone who wants to know what really happened and what they can do now.