Jerry Israel, is an education consultant. He is the former president of the University of Indianapolis and Morningside College, and chair of the history department at Illinois Wesleyan University. 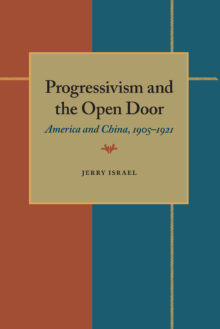 Progressivism and the Open Door

During the progressive era, most American policymakers agreed that China represented a land of unlimited opportunity for trade, investment and social reform. Serious divisions existed, however, over policy tactics. One side (mainly manufacturers and academics) advocated a unilateral policy of penetration allied only with Chinese modernizers. The other (primarily financiers and reformists), called for an alliance with other powers, especially Japan, in their dealings with China. In Progressivism and the Open Door, Jerry Israel examines the many factors that led to formal U.S. policy toward China during this era-one that ultimately found a middle ground between the two divisions.