Joan Casanovas, born in Barcelona, Spain, is assitant professor of Latin American and Carribean history at the Universitat Rovira i Virgili in Tarragona, Spain. He has published articles on slavery and the Cuban labor movement in the International Review of Social History and in Cuban Studies 25. 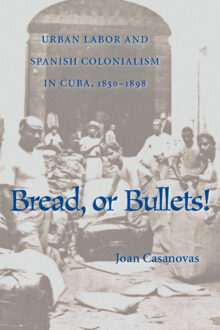 Bread or Bullets! is the first thoroughly documented history of organized labor in nineteenth-century Cuba. Based on research in libraries and archives in Cuba, Spain, the United States, and the Netherlands, it focuses on how urban laborers joined together in collective action during the transition from slave to free labor and in the last decades of Spanish colonial rule in Cuba. Nineteenth-century Cuban colonial society and the slavery system sharply divided Cuba’s inhabitants by race and origin. This deeply affected the labor movement that started in the late 1850s, as it became difficult to mobilize workers with common interests across the diverse ranks. Paradoxically, this also drove the workers to build class ties across divisions of origin, race, and degrees of freedom. This formed the basis for developing collective action. In the 1860s, the labor movement, under the leadership of white creoles and Spaniards, called peninsulares, joined the reformist movement of the creole bourgeoisie. The outbreak of the Ten Years’ War in 1868 created an extremely repressive atmosphere for labor that forced thousands of Cuban workers to flee to the United States. After the peace treaty of El Zanjon in 1878, the workers who returned and those who had remained used their experience to rebuild th Cuban labor movement at an impressive pace. This common goal led Cuban workers to fight continuously against divisions along racial and ethnic lines and to replace their moderate unionist and strongly pro-Spanish leadership with anarchists. The end of slavery accelerated the evolution of Cuban politics and the expansion of the labor movement. Spain’s shift toward reactionary colonial policies in 1890 halted this process and accentuated anticolonial sentiment among the popular classes. This helped the left wing of the separatist movement, led by Jose Marti, to launch the War of Independence in 1895 with strong working-class support. Bread of Bullets! is an important work for anyone interested in understanding Cuban society, Spanish colonialism, and labor relations in Latin America.