Jonathan Krieckhaus is assistant professor of political science at the University of Missouri-Columbia. 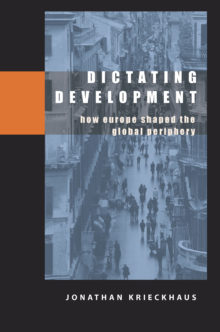 How Europe Shaped the Global Periphery

Dictating Development presents a powerful and original analysis of how colonialism has profoundly impacted the varying economic growth of developing nations. While previous studies have focused primarily on the domestic neoliberal policies of government and the political capacity of developing states, Dictating Development argues that economic growth is equally influenced (positively and negatively) by colonial powers. Jonathan Krieckhaus examines both historic colonial influences (on human capital and state structures) as well as contemporary ones (war, market access, and foreign aid). Based on an in-depth study of the regionally diverse nations of Mozambique, Korea, and Brazil, and a statistical analysis of growth in ninety-one countries from 1960 to 2000, Krieckhaus effectively demonstrates that most seemingly domestic political variables are in fact the byproduct of relationships with colonial powers. While not denying the role of neoliberalism as an important factor in development, Dictating Development reveals the roots of these policies: how colonialism influences the very nature of government and societal productivity.