June Hadden Hobbs grew up in Wynnewood, Oklahoma, where she often accompanied hymns on the piano at First Baptist Church. She is department chair and professor of English at Gardner-Webb University. 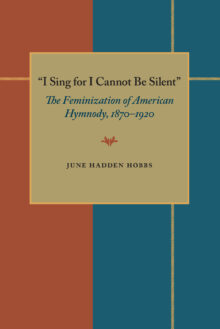 I Sing for I Cannot Be Silent

Evangelical churches sing hymns written between 1870 and 1920 so often that many children learn them by rote before they are able to read religious texts. A cherished part of communal Christian life and an important and effective way to teach doctrine today, these hymns served an additional social purpose in the late nineteenth and early twentieth centuries: they gave evangelical women a voice in their churches.

These feminized hymns are the focus of “I Sing for I Cannot Be Silent.” Drawing upon her own experience as a Baptist, June Hadden Hobbs argues that the evangelical tradition is an oral tradition–it is not anti-intellectual but antiprint. Evangelicals rely on memory and spontaneous oral improvisation; hymns serve to aid memory and permit interaction between oral and written language.

By comparing male and female hymnists' use of rhetorical forms, Hobbs shows how women utilized the only oral communication allowed to them in public worship. Gospel hymns permitted women to use a complex system of images already associated with women and domesticity. This feminized hymnody challenged the androcentric value system of evangelical Christianity by making visible the contrasting masculine and feminine versions of Christianity. When these hymns were sung in church, women's voices and opinions moved out of the private sphere and into public religion. The hymns are so powerful that they are suppressed by some contemporary fundamentalists today.

In “I Sing for I Cannot Be Silent” June Hadden Hobbs employs an interdisciplinary mix of feminist literary analysis, social history, rhetoric and composition theory, hymnology, autobiography, and theology to examine hymns central to worship in most evangelical churches today.