Katherine Isbester earned a Ph.D. in Latin American studies from the University of Toronto and taught there for several years. She has published widely on Latin American politics and gender issues and is currently on leave researching the politics of health care in Central America. 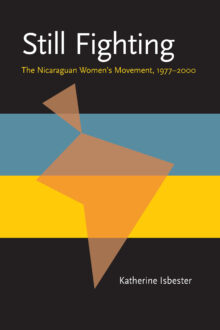 The story of the women’s movement in Nicaragua is a fascinating tale of resistance, strategy, and faith. From its birth in 1977 under the Somoza dictatorship through the Sandinista revolution to the fall of the Chamorro government, the Nicaraguan women’s movement has navigated revolutionary upheaval, profound changes in government, and rapidly shifting definitions of women’s roles in society. Through it all, the movement has surged, regressed, and persevered, entering the twenty-first century a powerful and influential force, stretching from the grassroots to the national level.

How did women in an economically underdeveloped Central American country, with little history of organizing, feminism, or democracy, succeed in creating networks, organizations, and campaigns that carved out a gender identity and challenged dominant ideologies (both revolutionary and conservative)? In Still Fighting, Katherine Isbester seeks to understand. She analyzes the complex and rich case of Nicaragua in order to learn more about the dynamics of social movements in general and women’s organizing in particular.

Social movement theory offers Isbester an analytic tool to explain the extraordinary evolution of the Nicaraguan movement. She theorizes that a sustainable movement is composed of three elements: a focused goal, a mobilization of resources, and an identity. The lack of any one of these weakens a social movement. Isbester shows how this theory is borne out by the experience of the Nicaraguan women’s movement over the past thirty years. She demonstrates, for example, how the revolutionary government of the 1980s co-opted the women’s movement, crippling its ability to create an autonomous identity, choose it own goals, and mobilize resources independent of the state. Hence, it lost legitimacy, membership, and influence. She traces the movement’s resurgence in the 1990s, the result of its redefinition as an autonomous movement organized around an identity of care.

Still Fighting combines social theory with field research, leading a new wave of scholarship on women in Latin America. Isbester interviewed more than a hundred key participants in the women’s movement, in addition to members of the National Assembly, male leaders of other social movements, and women outside the movement. In Nicaragua, she was witness to much political organizing, enabling her to reveal the organic intricacy, as well as the historical path, of a social movement.

Still Fighting will be an important book for a broad range of students and professionals in the areas of social movements, social change, gender, politics, and Latin America.