Kelly Ritter is associate professor of English and director of composition at the University of North Carolina at Greensboro. She is the author of Before Shaughnessy: Basic Writing at Yale and Harvard, 1920Ð1960 and Who Owns School? Authority, Students, and Online Discourse. Ritter also is editor of the journal College English. 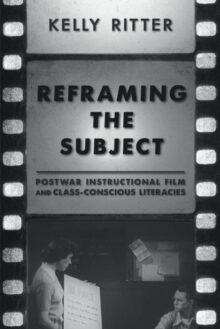 “Mental hygiene” films developed for classroom use touted vigilance, correct behavior, morality, and model citizenship. They also became powerful tools for teaching literacy skills and literacy-based behaviors to young people following the Second World War.
In this study, Kelly Ritter offers an extensive theoretical analysis of the alliance of the value systems inherent in mental hygiene films (class-based ideals, democracy, patriotism) with writing education—an alliance that continues today by way of the mass digital technologies used in teaching online. She further details the larger material and cultural forces at work in the production of these films behind the scenes and their effects on education trends.
Through her examination of literacy theory, instructional films, policy documents, and textbooks of the late 1940s to mid–1950s, Ritter demonstrates a reliance on pedagogies that emphasize institutional ideologies and correctness over epistemic complexity and de-emphasize the role of the student in his or her own learning process. To Ritter, these practices are sustained in today’s pedagogies and media that create a false promise of social uplift through formalized education, instead often resulting in negative material consequences. 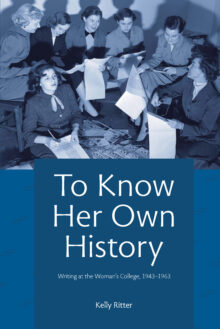 To Know Her Own History

To Know Her Own History chronicles the evolution of writing programs at a landmark Southern womenÆs college during the postwar period. Kelly Ritter finds that despite its conservative Southern culture and vocational roots, the WomanÆs College of the University of North Carolina was a unique setting where advanced writing programs and creativity flourished long before these trends emerged nationally.

Ritter profiles the history of the WomanÆs College, first as a normal school, where women trained as teachers with an emphasis on composition and analytical writing, then as a liberal arts college. She compares the burgeoning writing program here to those of the Seven Sisters (Wellesley, Smith, Radcliffe, Barnard, Vassar, Bryn Mawr, and Mount Holyoke) and to elite all-male universities, to show the singular progressivism of the WomanÆs College. Ritter presents lively student writing samples from the early postwar period to reveal a blurring of the boundaries between “creative” and “expository” styles.

By midcentury, a quantum shift toward creative writing changed administratorsÆ valuation of composition courses and staff at the WomanÆs College. An intensive process of curricular revisions, modeled after HarvardÆs “Redbook” plan, was proposed and rejected in 1951, as the college stood by its unique curricula and singular values. Ritter follows the plight of individual instructors of creative writing and composition, showing how their compensation and standing were made disproportionate by the shifting position of expository writing in relation to creative writing. Despite this unsettled period, the WomanÆs College continued to gain in stature, and by 1964 it became a prize acquisition of the University of North Carolina system.

RitterÆs study demonstrates the value of local histories to uncover undocumented advancements in writing education, offering insights into the political, cultural, and social conditions that influenced learning and methodologies at “marginalized” schools such as the WomanÆs College.