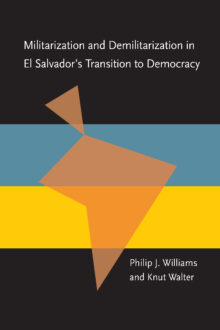 With the resignation of General Renee Emilio Ponce in March 1993, the Salvadorian army’s sixty-year domination of El Salvador came to an end. The country’s January 1992 peace accords stripped the military of the power it once enjoyed, placing many areas under civilian rule. Establishing civilian control during the transition to democracy was no easy task, especially for a country that had never experienced even a brief period of democracy in its history.
Phillip J. Williams and Knut Walter argue that prolonged military rule produced powerful obstacles that limited the possibilities for demilitarization in the wake of the peace accords. The failure of the accords to address several key aspects of the military’s political power had important implications for the democratic transition and for future civil-military relations.
Drawing on an impressive array of primary source materials and interviews, this book will be valuable to students, scholars, and policy makers concerned with civil-military relations, democratic transitions, and the peace process in Central America.