Kurt von Mettenheim is author of The Brazilian Voter: Mass Politics in Democratic Transition, 1974-1986, and editor of Presidential Institutions and Democratic Politics: Comparing Regional and National Contexts. He has taught at Columbia University, the University of Pittsburgh, and the Universidade de S‹o Paulo, and is currently writing a study of the Brazilian presidency. 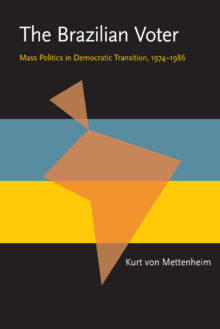 The dramatic transition from military to civilian rule in Brazil between 1974 and 1985 raises critical questions about voters, competitive party politics, and democracy at the end of the twentieth century.

This book argues that whereas military government stifled democratic activity, public opinion quickly revived when the military liberalized electoral politics in 1974. Voters rapidly aligned themselves with parties for and against military government, acquired new views on major issues, judged leaders by their performance and policies, and grounded their beliefs in concepts of social justice. Kurt von Mettenheim examines how Brazilian voters make choices and cast their ballots runs counter to long-held liberal theories about how democracy works.