Larry E. Holmes is a professor of history at the University of South Alabama where he has taught since 1968. During the 1992/3 academic year he lectured in Russian and Soviet History at Rostov State University in the Russian Federation. Holmes has been the recipient of numerous awards including grants from the Kennan Institute, National Endowment for the Humanities, American Council of Teachers of Russian, and the International Research and Exchanges Board. Author of The Kremlin and the Schoolhouse: Reforming Education in Soviet Russia, 1917Ð1931, and Sotsial’naia istoriia Rossii: 1917Ð1941, Holmes has also published articles in Slavic Review, Russian Review, History of Education Quarterly, and other scholarly forums. He lives in Mobile, AL. 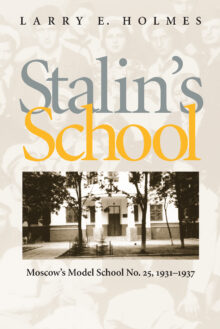 A different kind of history, Stalin’s School brings a unique human dimension to the Soviet Union of the 1930s and a new understanding of Stalinism as a cultural and psychological phenomenon.

From 1931 to 1937, School No. 25 was the most famous and most lavishly appointed school in the Soviet Union&mdash;instructing the children of such prominent parents as Joseph Stalin, head of the Communist Party, Viacheslav Molotov, head of the Soviet State, and Paul Robeson, American actor and singer. Relying on published records, materials in eleven archives, accounts left by visiting foreigners&mdash;including the prominent American educator George Counts&mdash;and thirty six interviews with surviving pupils from the 1930s, Holmes brings the school to life. The school's administrators, teachers, pupils, friends, and foes become companions as well as objects of this study as we walk the schools halls, enter its classrooms, eavesdrop on feuding officials who debate its fate, and learn something of what the school and the period meant for its youth. Photographs of the school's teachers and students, and reproductions of the students' notebooks, drawings, and watercolors add personality to this compelling story.

Holmes uses the experience of School No. 25 as a microcosm and mirror of Stalinism, illuminating the interplay of state and society in decision making, and providing an opportunity to examine Stalinism from ideological, cultural, and psychological perspectives. While placing the school's history in the context of the coercion, corruption and repression of the 1930s, Holmes challenges the prevailing view that state and public spectacle on the one hand, and society and private life, on the other, were contrasting entities. School No. 25 molded these elements into an organic whole. In the intimate setting of Stalin's School, the degree of acceptance of Stalinism transcends historians' customary reference to the fear or privilege a Soviet citizen experienced. In a mutually reinforcing way, forced compliance and voluntary choice moved individual teachers and pupils to accept a structured environment both at school and in society as the means to a powerful, prosperous, and just Soviet Union.