Mario Pecheny is professor of political science at the University of Buenos Aires and has been a visiting professor at Columbia University. 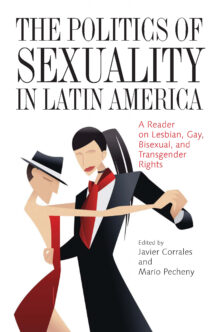 The Politics of Sexuality in Latin America

A Reader on Lesbian, Gay, Bisexual, and Transgender Rights

The city of Buenos Aires has guaranteed all couples, regardless of gender, the right to register civil unions. Mexico City has approved the Cohabitation Law, which grants same-sex couples marital rights identical to those of common-law relationships between men and women. Yet, a gay man was murdered every two days in Latin America in 2005, and Brazil recently led the world in homophobic murders. These facts illustrate the wide disparity in the treatment and rights of lesbian, gay, bisexual, and transgender (LGBT) populations across the region.

The Politics of Sexuality in Latin America presents the first English-language reader on LGBT politics in Latin America. Representing a range of contemporary works by scholars, activists, analysts, and politicians, the chapters address LGBT issues in nations from Cuba to Argentina. In their many findings, two main themes emerge: the struggle for LGBT rights has made significant inroads in the first decade of the twenty-first century (though not in every domain or every region); and the advances made were slow in coming compared to other social movements.

The articles uncover the many obstacles that LGBT activists face in establishing new laws and breaking down societal barriers. They identify perhaps the greatest roadblock in Latin American culture as an omnipresent system of “heteronormativity,” wherein heterosexuality, patriarchalism, gender hierarchies, and economic structures are deeply rooted in nearly every level of society. Along these lines, the texts explore specific impediments including family dependence, lack of public spaces, job opportunities, religious dictums, personal security, the complicated relationship between leftist political parties and LGBT movements in the region, and the ever-present “closets,” which keep LGBT issues out of the public eye.

The volume also looks to the future of LGBT activism in Latin America in areas such as globalization, changing demographics, the role of NGOs, and the rise of economic levels and education across societies, which may aid in a greater awareness of LGBT politics and issues. As the editors posit, to be democratic in the truest sense of the word, nations must recognize and address all segments of their populations.