Maximillian E. Novak/b> is professor of English at the University of California, Los Angeles. 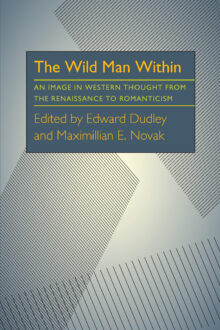 The Wild Man Within

An Image in Western Thought from the Renaissance to Romanticism

These essays trace the myth of the wild man from the Middle Ages to its disintegration into symbol in the periods following the discovery of America and encounter with real “wild men.” This is the first book to discuss the concept of wildness in the writings of the Enlightenment period in Western Europe and the first to attempt a broad, interdisciplinary approach to the subject of primitivism, not only from a strict “history of ideas” approach, but through discussions of individual works, both literary and political, and encompassing various subject matter from racism to the origins of language.Contributors: Richard Ashcraft; Ehrhard Bahr; John G. Burke; Earl Miner; Gary B. Nash; Stanley Robe; Geoffrey Symcox; Peter Thoralev; Hayden V. White, and the editors.