Meir Buzaglo is a lecturer in the department of philosophy of the Hebrew University of Jerusalem. He is the author of The Logic of Concept Expansion and Until the Day Prevails. 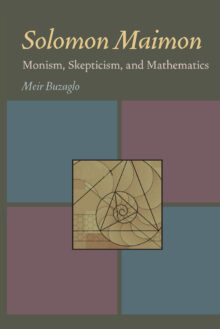 The philosophy of Solomon Maimon (1753&ndash;1800) is usually considered an important link between Kant’s transcendental philosophy and German idealism. Highly praised during his lifetime, over the past two centuries Maimon’s genius has been poorly understood and often ignored. Meir Buzaglo offers a reconstruction of Maimon’s philosophy, revealing that its true nature becomes apparent only when viewed in light of his philosophy of mathematics.

This provides the key to understanding Maimon’s solution to Kant’s quid juris question concerning the connection between intuition and concept in mathematics. Maimon’s original approach avoids dispensing with intuition (as in some versions of logicism and formalism) while reducing the reliance on intuition in its Kantian sense. As Buzaglo demonstrates, this led Maimon to question Kant’s ultimate rejection of the possibility of metaphysics and, simultaneously, to suggest a unique type of skepticism.