Peter Mortensen, associate professor of English at the University of Illinois at Urbana-Champaign, is co-editor of Ethics and Representation in Qualitative Studies of Literacy. 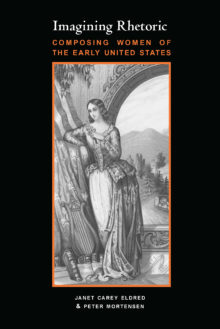 Imagining Rhetoric examines how womenÆs writing developed in the decades between the American Revolution and the Civil War, and how women imagined using their education to further the civic aims of an idealistic new nation.

In the late eighteenth century, proponents of female education in the United States appropriated the language of the Revolution to advance the cause of womenÆs literacy. Schooling for women&mdash;along with abolition, suffrage, and temperance&mdash;became one of the four primary arenas of nineteenth-century womenÆs activism. Following the Revolution, textbooks and fictions about schooling materialized that revealed ideal curricula for women covering subjects from botany and chemistry to rhetoric and composition. A few short decades later, such curricula and hopes for female civic rhetoric changed under the pressure of threatened disunion.

Using a variety of texts, including novels, textbooks, letters, diaries, and memoirs, Janet Carey Eldred and Peter Mortensen chart the shifting ideas about how women should learn and use writing, from the early days of the republic through the antebellum years. They also reveal how these models shaped womenÆs awareness of female civic rhetoric&mdash;both its possibilities and limitations.